Home Uncategorized Characteristics of Autistic Student and their Needs in School

Characteristics of Autistic Student and their Needs in School

Autism is a disorder that is caused because of neuronal impairment. It leads to a lack of social interaction and communication in individuals who suffer from it. The signs of Autism can include childhood repetitive behavior, lack of communication, lack of understanding, and lack of self-esteem or trust. These signs can be seen in a child when he is nearly three years old, and the parents can quickly diagnose it. Autism can be categorized further as Aspergers Syndrome and high functioning autism. Individuals who have Autism cannot survive without a caregiver in society and face difficulties when entering a relationship. All these factors, as mentioned earlier, clearly show that Autism is a disorder that needs to be cured to have a better society. For this reason, many therapies have been suggested which require early intervention programs for the children. Now the question arises whether the intervention and diagnosis treatment for Autism is successful or not. In my view, governments should take an equal stand in the early intervention programs for autistic children (Wray et al. 2005; Dorothea 2009). 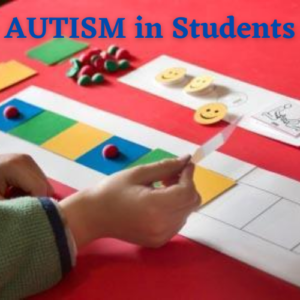 An autistic student would possibly be exhibiting many signs of Autism, which should be noticed by the teacher or the parent to confirm the diagnosis of the disorder. An autistic student may suffer from many problems while studying in the class, which can easily be identified. As autistic children have developmental issues, they tend to suffer from social problems within the school. Social deficits in the child can be noticed easily as this student cannot make eye contact with anyone. The student faces problems when socializing with other students and teachers. It can also be seen that this student does not have friends within the school because of the fear that he may have for socializing with others. He instead prefers loneliness over being with many people and is seen sitting alone most of the time. These characteristics signify that the student is suffering from a social disorder because of which he is not able to socialize with people.

Along with the social disorder, the student also has difficulties in communicating with others. It is seen that the autistic student cannot speak properly and blabbers in many instances with the teacher. The student cannot interact appropriately and would use improper gestures to exhibit his feelings. The student does not share his personal opinions nor has the courage to stand for something that he has not done. Even when the students are asked to participate in the class activities, it is seen that the autistic student finds it very difficult to join them. The student is known to face many problems in the class because of which he has difficulties in studying with other students (Dorothea 2009; Wray et al. 2005).

Lastly, the autistic student also displays repetitive behaviors, which can be seen in different actions. In the classroom, the student is seen to stack pencils and rubbers in an arranged manner. Moreover, he often moves while sitting in the same fashion, which can be noticed by the teacher. These five characteristics are commonly seen in autistic students, which should be notified by the teacher so that the student can be diagnosed accordingly (Dorothea 2009).

Determine at least five student needs, given the nature of the disability.

The student is suffering from a social disorder that needs to be looked upon appropriately by the teacher and parents. The student requires special care from the authorities and parents so that he can recover. The student requires an environment where he can practice all he wants to. His interests should never be questioned by the teacher or parents, but instead, they should encourage him to be creative. The student requires someone close to him to teach him how to speak and act on specific instances. The caregiver should make him learn to speak properly and make appropriate use of his knowledge. The caregiver should encourage him to make eye contact with people when talking to them so that he does not feel shy. People should always be around him so that he does not feel lonely. The autistic student will still often feel like hurting himself, but if he has people around he can not do so. In certain instances, the student should also be discouraged from carrying out repetitive acts. Moving and stacking things should be discouraged by his caregiver.

The routine for the student should be set up by the teacher or the caregiver only. The caregiver should ensure that the student understands each and everything of the method that is being changed. This would help the student to ensure that he does not misinterpret the instructions that are being given to him.

Identify at least five accommodations to facilitate the advancement of this student and include a reason for each accommodation that is provided.

Autism is a disorder because of which the social cognitive abilities of the children do not develop properly, but the disease is not lethal enough to cause death in these children or individuals. To help these children cope up with the increased pressure in life, school systems can prove to be really helpful in curing them. It has been reported that kids with Autism are more prone to being bullied in schools than their counterparts. The reason for this can be attributed to the fact that their cognitive abilities are less to converse or sort out the bullies (Donvan et al. 2007).

School authorities or teachers can make several accommodations to make the classroom a better environment for these children. The teachers who are dealing with these special children should make the situation or routine of the class as easy as they can so that the students can easily manage themselves. Children suffering from Autism are known to concentrate on their specific areas of interest, which can be promoted by the teachers. The teachers can take into view these special interests of the students and then reward them accordingly for doing well in these areas. This would help in building up the attention of the children in all related areas of education. These individuals face difficulties when understanding and implementing certain things. To help improve their understanding, the teachers can make the subject simple and easy to understand. These children lack the aspect of incidental learning because of which they need to be taught directly without any remarks of humor in between the lectures. The teachers should be using a clear and direct language so that these children do not get diverted during the talks. Instructions should be repeated in the class as these students do not tend to understand the instructions in the very first instance. Visuals and presentations have a positive effect on children suffering from Autism. Hence these visuals can be used in school to learn quickly and process these visual events according to their nature of the study. Bullying is mentioned above is a factor which lowers the morale of children with Autism. Hence the teachers ensure that these students are not bullied within the school (National Conference 1996; Bauer 1996; Donvan et al. 2007).

The problem of the social deficit should also be managed by the teachers as they should encourage the student to participate in different activities that are being carried out in the class. The students should be encouraged to make eye contact with anyone that they talk to. Moreover, other students in the course should be encouraged to be friends with them so that they are not left lonely. Communication of these students can only be improved if the teachers encourage them to talk a lot during the class. The teachers should encourage interaction with the students so that they do not feel shy when expressing their feelings to the teacher.

Teachers have to play an affectionate role with Autism-suffering students so that they do not become de-motivated. Any sign of anxiety should be noticed by these teachers as it may be because of the hindrances faced by the student in the school. Interpretation of the actions and behaviors of these children is essential as it may reflect what the child wants. The teachers should always be encouraging the students to take part in social activities, which would help the students to build up a social cognitive base. School can act as a primary factor to elevate the children’s morale according to the disorder they are facing (Prior 2003).

Children who have Autism need to have a clear view of whatever they are doing as these children are unaware of all the social aspects of society. Thus to cure these children and make them capable of knowing these realms of community, one has to provide them with proper guidance. This guidance includes the programs which should either be promoted by the private organizations or the government ones. Preschool services and other varied initiatives have clearly proven to be a great benefit in treating children with Autism. These programs include behavioral interventions, which make the children use all their capabilities to get normal like the other children in the society. These children are asked to use their visual skills because of which they are instructed by their parents or staff members of the organization. However, this is not the only program that can help the child to become better, but there are other programs also which help the child to cope up with the society. These include discrete trial teaching, music therapy, occupational therapy, dietary intervention, and vision therapy. All these behavioral interventions can help the children to learn and adjust to the social functioning aspect of the brain. It can be seen that many organizations all over the world are promoting these programs so that the individuals who have Autism can be cured (Wray et al. 2005).

Autism is a disorder that can be treated with the therapies mentioned above and proper care. All these things are necessary for the early intervention of the student. The American with Disabilities Act ensures that individuals with Autism are recognized as disabled, and it urges employers to let go of some actions of these individuals based on their disorder. Moreover, financial programs are also provided by the government in America to the schools because of which the schools provide the children with the necessary education and therapy so that the children can tackle any such disorder. In the United Kingdom, the report of ‘Every Child Matters’ states that early intervention programs should always be there for disabled children (Dorothea 2009, Wray et al. 2005).